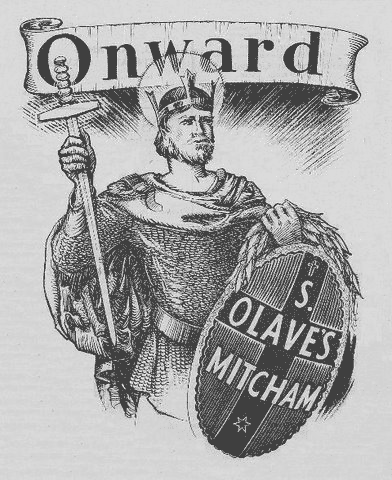 “St. Olave’s” is the anglicised version of “St. Olaf’s”, and the pronunciation rhymes with “olives”, as it has done from at least the seventeenth century.  St. Olave’s in Mitcham took its dedication from the redundant church of St. Olave’s, Tooley Street, once sited at the southern end of the medieval London Bridge; that church took its name from Olaf, patron saint of Norway and patron saint of seafarers, and popular in areas inhabited by people of Scandinavian origin.

Olaf Haraldson was born in Norway in 995. During the reign of Aethelred the Unready of England he took service and fought with him against King Swein of Denmark’s invasion of England, saving London from the Danes by breaking down London Bridge, and he was with Aethelred when he was restored to the English throne in 1014.

During his time in England, Olaf was converted to Christianity and in 1015 was baptised at Rouen. At the age of 19 he returned home with around 120 followers. Olaf imposed kingdom-wide laws and insisted on their enforcement without bribes or threats; at the same time he insisted on the observance of Christian practices.  He brought an English bishop to oversee the Church.

After being forced into exile in 1028, Olaf returned to Norway in 1030, but was defeated and killed at the battle of Stiklestad. His tomb became a place of pilgrimage and healings, and he was declared a saint.  His feast day is 29th July. 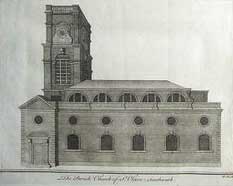 The mediaeval church of St. Olave’s developed into one of four aisles. However, it fell into disrepair and, in consequence of digging graves in the church too near the foundations of a pillar, the whole of the north side of the church fell down.  Most of the church was demolished and rebuilt by Act of Parliament.

The succeeding church, designed by Henry Flitcroft, was built between 1737 and 1739 of Portland stone.  The nave and aisles were divided by fluted columns of the Ionic order and there was a semi-circular apse. Almost 100 years later, during the night of 19th August 1843, there was a great fire in Tooley Street.  Of the fabric of the church, only the tower and the bare walls remained, and the fittings were either burnt or smashed by the falling roof.

The old church was speedily rebuilt to much the same design during 1844, this time with a huge pipe organ to the design of Dr Henry Gauntlett.  However, by the early twentieth century hardly anyone lived in the parish, and the the building was declared redundant and finally demolished in 1928. Fortunately, a decision was made at the same time to establish a new district and parish in the north-eastern portion of the old parish of Mitcham, to which the dedication of St. Olave was transferred. 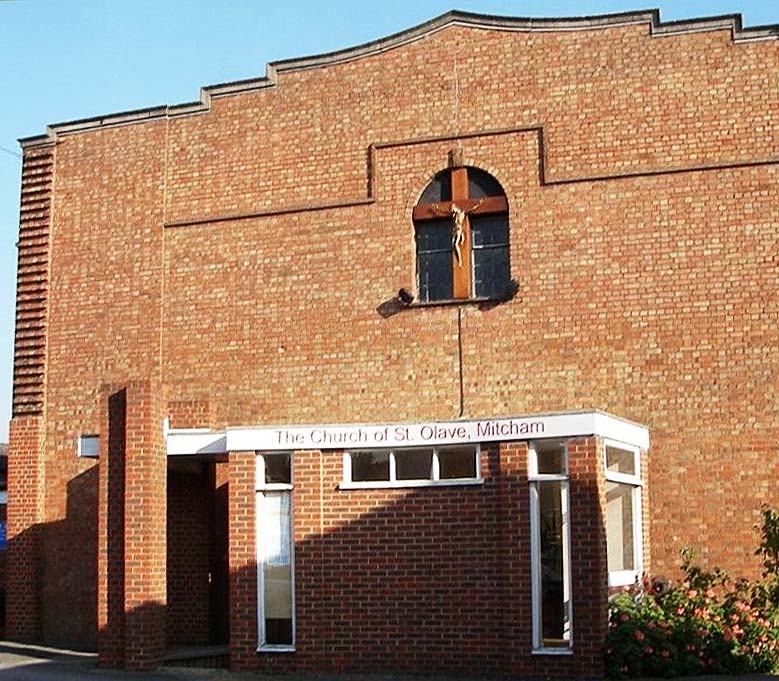 A missionary priest was assigned to the new district in 1927, and a building of wood and asbestos sheeting was erected to serve as a temporary church and later as the church hall.  The Foundation Stone of the new church building was laid by Mrs. Garbett, the Bishop of Southwark’s mother, on May 3rd 1930, and on January 17th 1931 the church was consecrated by the Rt. Revd. Cyril Garbett, Bishop of Southwark.  The main Sunday service was “Holy Communion: Sung with Address” at which the celebrant wore vestments.  Father Haslam made it plain that he was an Anglo-Catholic and set about establishing worship accordingly.

By 1939 there was a Lady Chapel with a statue of the Virgin and Child; the use of incense had been approved; the Sacrament was reserved. The parish grew and thrived in the pre-war era, with many social groups and youth organisations as well as a full observance of the Church’s liturgical year.  A vicarage was built, and the parish was reduced in size by the formation of The Ascension district. 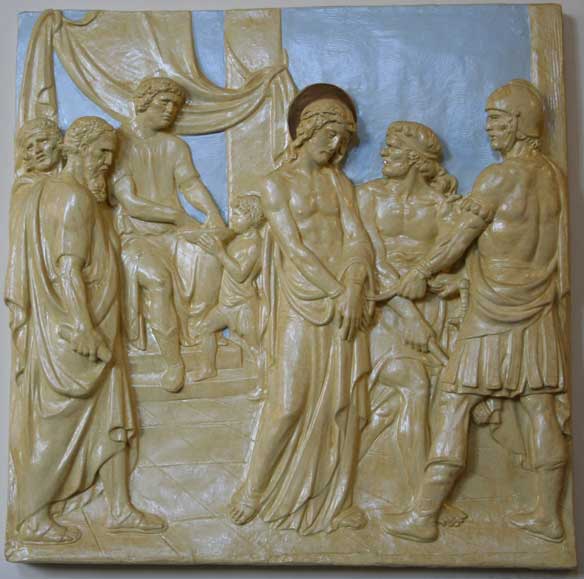 In 1950 the Stations of the Cross were placed on the walls of the church and were, after a Consistory Court, the first set to be approved in the Diocese of Southwark. In 1951 the mid-morning service on Sunday was High Mass from The English Missal; attendance at the eight o’clock Mass only dropped below fifty for special reasons, such as the Parish Holiday, or unusual cold.

Six years later the figure of the Reigning Christ was placed on the east wall. By 1961 it was the older members who attended the early Sunday celebration, and the main service was a “Parish Eucharist”, still with music and ceremonial, but more soberly “Prayer Book Catholic”. In the 1960s an active stewardship and Planned Giving campaign was mounted, and a successful and popular innovation was the institution of regular Parish Breakfasts, at which members could meet each other after the Sunday morning Eucharist.

By 1967 the need for extensive repairs to the church fabric led to plans for a sale of part of the church grounds for housing.  Many problems had to be overcome and progress was slow, but eventually the old Hall was demolished, houses were built on the land to the west and south of the church, a church car park was formed and by 1976 the new Parish Hall had been built on the north side of the church.

The introduction of new, alternative forms of service in the 1970s led to much discussion and heart-searching, and experiments were carried out also in the arrangements of the church furniture.  A memorial of the church’s Golden Jubilee in 1981 was the establishment of a nave altar on a carpeted platform in front of the entrance to the chancel, under the dome.

After discussions in the 1980s the parish became part of the Mitcham Group Ministry, now formed of the parishes of St. Barnabas, St. Mark, St. Olave and SS Peter and Paul.

During the 1980s financial problems accumulated; these have been alleviated by the hire of the Hall to a Day Nursery and by rental income from telephone masts on the tower.  There has been much social and demographic change since the first houses were built in the late 1920s and yet more movement of population.

The decision of General Synod to allow the ordination of women priests has had a profound effect on the parish.  A ballot of the congregation resulted in the PCC passing Resolutions A and B, and two years later Resolution C, asking for alternative oversight by an Episcopal Visitor, the Bishop of Fulham. The parish belongs to the Society of St Wilfred and St Hilda, an organisation for similar churches, and there is now a more positive attitude from the bishops of the Church of England towards ‘traditional’ parishes.

Following the receipt of a generous legacy, it seems that at last some of the serious problems with the building can be addressed.

The church is built in an “Orthodox” or “Byzantine” design, unusual in English parish church architecture, which, in its day, was an attempt to foster a new sort of parish church style, albeit one that was short-lived.  The method of building was essentially modern, with brick walls but the roof and vaulting of reinforced concrete.

The church building, consecrated in 1931, was never completed as its architect, Arthur Campbell Martin (1875-1963), intended: his proposed design incorporated a further bay at the west end of the nave, effectively doubling its current length, with, in addition, an Italianate bell tower or campanile and, at the north-east corner of the church, a Lady Chapel with access from the northern transept. The completed church would have seated well over five hundred people.

The solid uncompromising external aspect of St. Olave’s can seem a little daunting at first view.  The plainly decorated interior is executed in orthodox Byzantine style, with a large central dome over the crossing.  The scale of its internal structure brings light, shade and dimension to a surprisingly open and airy space. 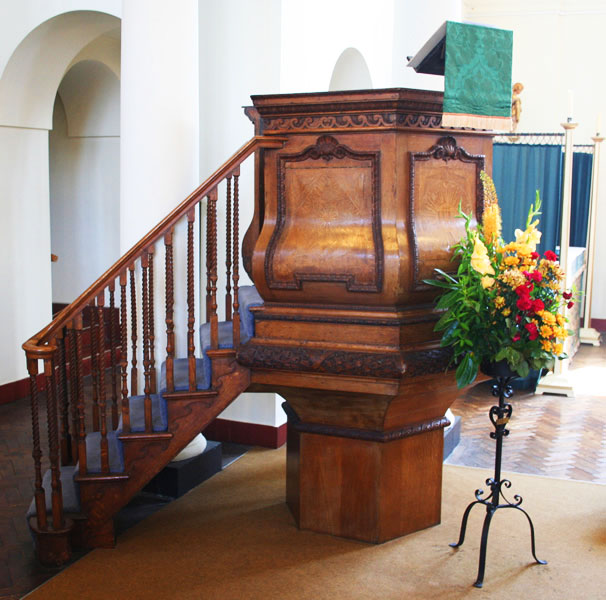 The finely inlaid pulpit and the composite font in three sections came from the old St. Olave’s in London, as did the two bells and some church plate.  The organ was installed by Rest Cartwright and Company and came from Monkhams, a house in Woodford,Essex, once owned by Arnold Hills – hence the coat of arms and motto on the case.

Many of the beautiful altar frontals and appointments have been personally worked and presented by parishioners, as were the oak communion rails and furniture.  The remarkable Stations of the Cross were given by his family as a memorial to Harry Rudolph, the first People’s Warden.

The figure of Christ in Majesty on the East wall dates from 1956; there are statues of Our Lady and of St Joseph. In the 1970s a new Hall was built, joined to the church and the present porch in Church Walk was added.  In 1981 the interior was reordered to accommodate a (nearly) central nave altar. 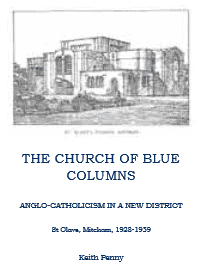 The Church of Blue Columns by Keith Penny is available in Morden Local History Library and can be purchased from him for £7.50 including p & p.  See Contacts for email address.

The ‘Twenty-Five’ Churches of the Southwark Diocese by Kenneth Richardson, published by the Ecclesiological Society is available online and in Morden Local History Library.

If you are at home, take time during the day to pray for the world and for peace; for the Church; for our country and Government: for doctors, nurses and emergency services; for those at work; for your family, loved ones and friends; for those who are lonely or anxious; for the sick and dying: for the departed; and for  yourself and your own needs and concerns.

Daily Prayer as set by the Church of England is at http://daily.commonworship.com/daily.cgi.

Bible readings are on lots of websites, for example Oremus at http://bible.oremus.org.

Keep us, good Lord, under the shadow of your mercy. Sustain and support the anxious, be with those who care for the sick, and lift up all who are brought low; that we may find comfort knowing that nothing can separate us from your love in Christ Jesus our Lord. Amen.

The parish of St Olave, Mitcham, takes the safeguarding and care of children and vulnerable adults very seriously. Further information about this can be found at Safeguarding